Claudio Roditi, born 1946 in Rio de Janeiro, Brazil, is one of the best trumpet players in the world. He studied at the Berklee School of Music in Boston.

Since 1976 Claudio is living in New York City. Since that time he has performed and/or recorded with McCoy Tyner, Herbie Mann, Slide Hampton, Horace Silver, Jim Hall, Tito Puente, Chick Corea, Paquito d`Rivera among others. Beginning in 1989, Claudio travelled for several years as a member of Dizzy Gillespie’s United Nation Orchestra. Claudio is especially known for his brillant tone, immense virtuosity and powerful playing. Since April 1987 he works regularly with Klaus Ignatzek. 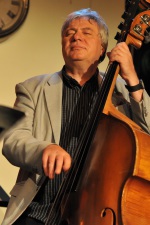 Jean-Louis Rassinfosse, born 1952, must be the most sought-after bass player on the Belgium scene. His reputation as a musician of international standing was chiefly forged through his work with Chet Baker, lasting over 10 years. He has toured with George Coleman, Joe Henderson, Michel Petrucciani, Philly Joe Jones, Toots Thielemanns among others. Jean-Louis has an excellent ear for melody and is a master at inventing interesting walking bass lines, in short a virtuoso whose international reputation is getting bigger by the minute. Since 1988 Jean-Louis works with Klaus Ignatzek in different settings.